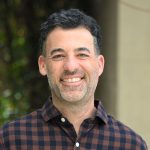 From hosting Nickelodeon’s popular Slime Time Live and the Kids’ Choice Award red carpet show, to Disney’s ESPN club, and even American Idol’s online content, he had built a successful career in broadcast at a young age.

It had been his dream since his days doing the morning announcements as a junior at Marjorie Stoneman Douglas High School. At the University of Miami, he had immersed himself in journalism, serving as sports director for WVUM radio and news anchor for UMTV.

Soon after graduating, he had begun his decades-long career hosting shows on a variety of networks, including CBS and The CW. He traveled often and was on national television every day, interviewing top athletes and celebrities including John Travolta, Jennifer Lopez, Will Smith, and even fellow UM alumnus Dwayne Johnson.

“I got to do so many incredible things,” he says.

Then came the diagnosis.

In January 2015, a small mole on Aizer’s face was diagnosed as malignant melanoma and later stage 3 cancer. Thankfully, it was caught on time and after treatment and two surgeries at the Sylvester Cancer Center, he was cancer-free.

But the experience left scars beyond the one he now has on his face.

“It was a wake-up call,” he recalls. Being faced with his own mortality made the funny and outgoing TV host take stock of his own life: despite the fun career, he had floated through his 20s and 30s without purpose. He wanted, and needed, to live a more purposeful life.

“I needed to find a way to make something good out of a bad diagnosis,” he says.

He turned to advocacy, becoming an ambassador for the Sylvester Cancer Center, the place he says saved his life. He spoke on behalf of organizations like the American Cancer Society and the Melanoma Research Foundation, educating and warning others about the risks of skin cancer.

Aizer, who remembers often being mad at himself for not moving on fast enough once he was cancer-free, also wanted to help patients deal with the emotional impact of the disease and be kinder to themselves.  “It’s ok to laugh,” he says. “It’s ok to smile, even if just once a day. And it’s ok to be anxious.”

His book, A Hypochondriac’s Guide To Beating Cancer: You’ll Laugh, You’ll Cry, You’ll Call Your Doctor, is a funny, self-deprecating account of his survival journey. “The goal of this book is to make you laugh,” he writes. “More than that, it’s to empower you to take ownership of your feelings, whether you’re personally going through cancer or know someone who is.”

Today, the Staten Island native runs Elite Media Coaching, the company he founded to help people overcome fears of public speaking and communicate with confidence. He enjoys being able to use the knowledge he’s acquired over the years to help others deal with something that causes them anxiety and often interferes with their personal and professional lives.

He is expecting his first child and his days are divided between writing his new book, motivational speaking (he just presented his first TED Talk), and coaching. He’s living a new dream, this time filled with purpose.

You can learn more about Dave and his work by visiting daveaizer.com.