From Miami to Madagascar

Malaria had forced some members of their team to drop out, and at one point, they ran out of food. Still, the group of three scientists weakened and a bit wobbly, pressed on. Finally, after more than a week of hacking through seemingly impenetrable forest, they reached the base of the plateau. The hardest part of their journey, though, was just beginning—a 9,000-foot ascent of Mount Roraima.

Mireya Mayor, the only woman in the group, knew the climb wouldn’t be easy. Several explorers before them had abandoned attempts to scale the massive flattop summit, located at the point at which the boundaries of Brazil, Venezuela, and Guyana meet. But Mayor, a primatologist and anthropologist with an unending thirst for knowledge, was determined not to become one of those who failed. “The potential for discovery was just too great,” she said.

So she and her team mustered the strength and made it to the top, discovering five new species of frogs along the way and collecting hundreds of plant specimens that would be shipped to the Smithsonian for analysis. “A very fruitful expedition,” she would say.

Today, Mayor is still the adventurous type, and her quest for exploration hasn’t waned in the least.

An Emmy Award-nominated National Geographic field correspondent and University of Miami alumna, Mayor has traveled the world, trekking through dangerous terrain to study primates in Africa, South America, and Madagascar. Once, in the Democratic Republic of Congo, she dodged a charging 350-pound silverback gorilla and climbed a tree to evade a stampeding elephant—all on the same day.

On a 2003 expedition in Madagascar, Mayor co-discovered a rare, new species of mouse lemur, inspiring the prime minister of that island nation to establish a national park to help protect what is believed to be the world’s smallest primate.

On Friday, Mayor returns to UM to deliver a keynote address as part of the first National Geographic On Campus event, a two-day science and storytelling symposium that will unite students with Nat Geo explorers to discuss pressing local and global issues—and the strategies to help solve them.

Mayor’s story is an unlikely one. The daughter of a Cuban immigrant mother, she was raised in Miami’s Little Havana and started speaking Spanish before English. “I tell people that I’m Cuban, and I mean it. Miami will always be home,” said Mayor, who now lives with her husband and six children in Great Falls, Virginia.

She enrolled at the University of Miami as a pre-law student. But an anthropology course she took to satisfy a science requirement—and the College of Arts and Sciences professor, Linda L. Taylor, who taught it—changed her life.

“She was incredibly inspiring. She opened my eyes to a world I didn’t know existed, teaching me that there were primates on the verge of extinction that had never been studied or photographed, and that compelled me to pursue a new career,” Mayor recalled of Taylor.

As an undergraduate, Mayor traveled to Guyana to conduct fieldwork, an experience Taylor said opened her star pupil’s “eyes to the possibility of what she could do.”

“I could see her interest and involvement grow,” said Taylor. “I remember her hitting the wall and sliding down to the floor when she got the news that she had won a National Science Foundation grant. She’s a rock star, for sure.”

On Sunday afternoons, when Mayor wasn’t attending classes on the UM campus, she spent her time on the sidelines of the then-named Pro Player Stadium, rooting for the Miami Dolphins as an official team cheerleader. She didn’t do it to garner fame or attention. “I was just a diehard football fan who wanted the best seats in the house,” she explained. “And what better way to have them than to become a cheerleader.”

She earned degrees in anthropology and philosophy at UM, eventually becoming a Fulbright Scholar and completing her doctorate at Stony Brook University in New York. Her latest book, Pink Boots and a Machete, details her journey from NFL cheerleader to National Geographic explorer. 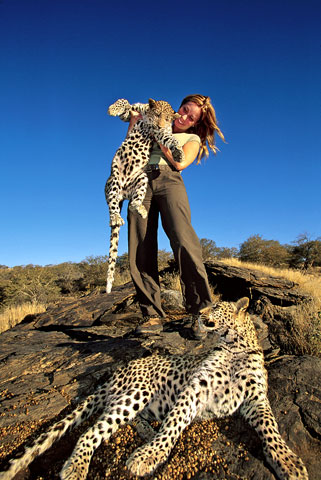 Her adventures of coming face to face with aggressive animals in the wild have earned her the nickname, “the Female Indiana Jones.” But Mayor doesn’t mind. “I love the name,” she said. “People instantly get it, and anything that helps them understand, connect, and immediately identify with what I do is okay. There are definitely worse things to be called.”

Mayor actually got the chance to meet the other Indiana Jones, Harrison Ford, two weeks ago, when the famed actor was in Indianapolis to present a conservation award to primatologist and herpetologist Russell Alan Mittermeier, one of her colleagues.

“I told him [Ford] that for almost 20 years I’ve had to carry the legacy and the title of Female Indiana Jones, but that just for tonight, he was the male Mireya Mayor.”

But what’s no laughing matter to Mayor is that global wildlife populations—threatened by pollution, deforestation, climate change, and other manmade factors—have declined by 60 percent over the past four decades. “Earth,” warns the World Wildlife Fund in its Living Planet Report, “is losing biodiversity at a rate seen only during mass extinctions.”

Mayor believes it will take a global effort to protect the world’s animal populations, with an accord similar to the Paris Climate Agreement perhaps being the most important step in that direction.

“It isn’t possible to bring enough attention to the crisis we’re facing,” she said. “Extinction is forever. We could very well lose some of the most beautiful and iconic animals of our time, and that’s a very scary thought. I want my children and their children to see these animals in the wild, not just in science books.”

Her message to UM students in advance of her Friday Nat Geo lecture: “Each of us can make a difference, even if it’s just by becoming aware and educated about the steps we can take to protect the environment and wildlife.”